The Clean Air Act (CAA) may be middle-aged given its 1963 origin, but in a global economy fervently trying to combat the effects of climate change, there is certainly nothing passé about the ambition to reduce atmospheric levels of carbon dioxide (CO2)―the most dangerous and prevalent greenhouse gas―threatening the planet’s weather, climate systems, and air quality. While the regulation of carbon emissions has indeed been a point of contention among government and business sectors alike since the dawn of the CAA. But today’s vogue terms like carbon capture, social cost of carbon, and speculative cost of carbon, revive the controversy as industrial emission sources are increasingly scrutinized, not only as part of what has become an international campaign to combat the effects of climate change, but specifically as part of the U.S. Environmental Protection Agency’s (EPA’s) new environmental justice initiative.

Given the ubiquitous nature of carbon in the Earth’s atmosphere, let alone the prolific human generated and consumed hydrocarbons that form fuels, this article will focus on one designated source of carbon emissions, stationary sources, which call to mind visions of manufacturing facilities, smokestacks, and industrial complexes. Specifically, this article will outline how and why stationary industrial sources are subject to heightened scrutiny due to recent changes in federal policy, as well as how this shift in ideals will trickle down to state implementation of the CAA. We will also discuss why paying attention to carbon regulation and the political climate is crucial to the industrial players not just now, but long term.

The optics of the new administration, and derivatively the EPA, are undeniably aimed at combating climate change. Most notably, the social cost of carbon (SCC), which converts the future harm inflicted by the release of one additional ton of carbon dioxide into a present monetary value (i.e., $50 per ton of CO2 emissions), has risen to over seven times what it was under the previous administration, with the expectation of further increase in the coming years.

An increased SCC, although not imminently affecting businesses, will sway policy decisions and likely cap approvals for industrial projects and corporate development. This heightened emphasis on the SCC is indicative of the global concern for the impacts of carbon emissions. Along with the increased SCC, there has also been a concerted effort to reduce carbon emissions through the introduction of incentivized programs, such as tax credits for those stationary sources that demonstrate due diligence and compliance. Contemporaneous with this alert, the U.S. House of Representatives is deliberating bipartisan legislation that would increase the existing tax credit rate for carbon capture and sequestration. Incentives such as this stand to benefit businesses that buy-in to compliance and initiate voluntary measures to regulate and monitor carbon emissions.

The EPA itself promises to promulgate its own programs to contribute to regulation of toxic violators. The heightened oversight that stationary sources are facing can be especially attributed to the EPA’s environmental justice initiative, which targets disenfranchised minority populations residing in urban areas often infiltrated by a dense population of stationary sources. These factory rich communities suffer the more immediate impacts of stationary source carbon emissions and, as the argument goes, are therefore victims of toxic environmental injustice. The EPA, although lacking the power to enact legislation at the state level, aims to actively engage with state environmental quality programs to influence more aggressive, equitable, and community-focused policy making. 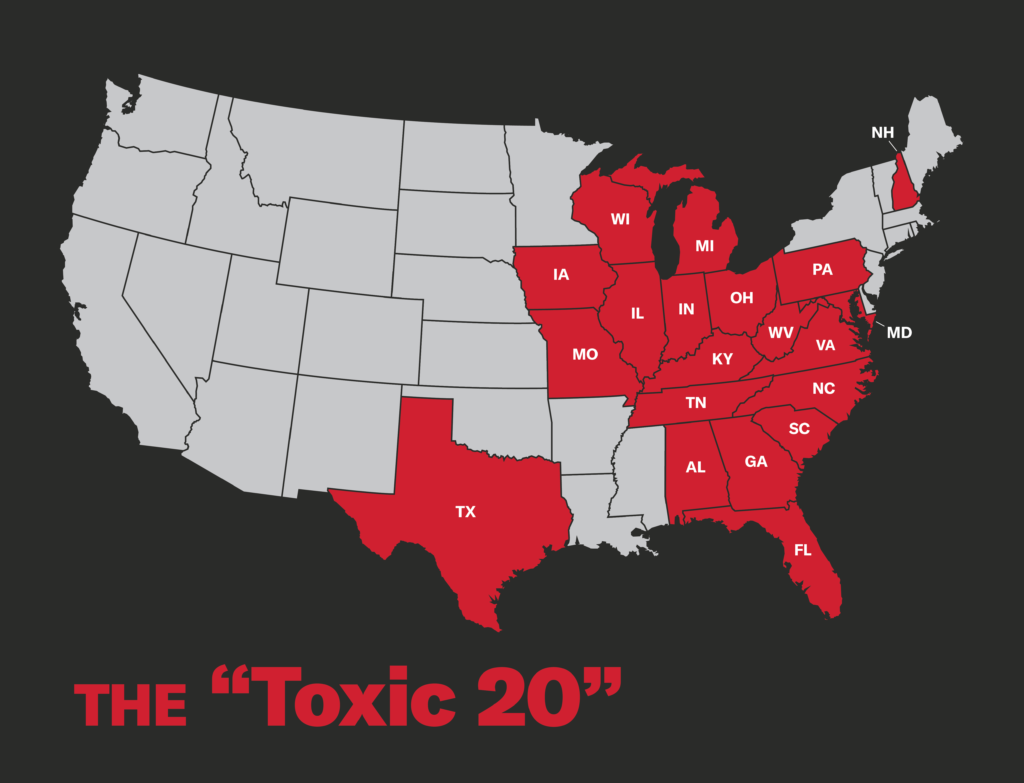 ​In the map above, we highlight 20 states that are most affected by industrial carbon emissions. Some of these “toxic 20” have been materially influenced by the EPA’s new climate- and carbon-focused initiative. They are already beginning to witness a shift in the ideals of the state body, and even proposed legislation enacting change. For example, in North Carolina, there has been a drastic increase in support of joining the Regional Greenhouse Gas Initiative (RGGI). The RGGI is a coalition of 10 East Coast states dedicated to reducing emissions from stationary sources.

The trend over the coming years is undeniably focused, globally and nationally, on the increased regulation and reduction of carbon emissions. We see it at both the federal and state levels. In not being aware of this trend, but mindfully proactive, businesses will benefit from proactively evaluating their own carbon emission data. Having a tried and true process for measuring and reporting carbon emissions data is crucial in taking action to comply with current legislation and regulations, but also to preempt future precedent. The availability of carbon emissions data has the added benefit of bolstering corporate reputation in the eyes of investors.

In tandem with the EPA’s campaign to capture and reduce carbon and combat environmental injustice, investors requiring this sort of information and data collection has rapidly increased over the past decade, and given the recent push for ESG and socially conscious investing, this demand will only continue to rise. Moreover, analyzing corporate emissions data can reveal financially beneficial opportunities, such as the tax credit program for carbon capture and sequestration. Conversely, this data can also serve as an indicator of future risks your company may face and can help with the mitigation of those risks.

*The authors were assisted by legal intern and University at Buffalo student Colin M. Jackson.

For more information or immediate guidance, please reach out to our Environmental Law team:

Rosemarie C. Hebner Explores Future of Mining in the U.S. with Law360