Though many still think of wheelchair ramps and low curbs when they think of access for disabled consumers, it’s website-accessibility lawsuits that are now confounding retailers and hoteliers.

Miami resident Juan Carlos Gil has long shopped at Winn-Dixie because the prices are low and the chain’s grocery stores house pharmacies where he can have prescriptions filled. But some of his needs Winn-Dixie hasn’t been able to meet because the chain’s website is 90 percent inaccessible to him, he says.

Juan, who is legally blind, and prefers shopping on the web because it affords more independence and privacy than brick-and-mortar stores, requires screen-reader software to navigate a website. But he found Winn-Dixie’s site didn’t work with his industry-standard software, JAWS, which translates visual images and text on a computer screen into audible speech, so that Juan knows what’s happening on a site and what he needs to type to navigate it. Because Winn-Dixie’s website did not allow him to use this technology to conduct his online shopping, he sued the company for violating the Americans with Disabilities Act (ADA), claiming that Winn-Dixie’s website did not comply with the Web Content Accessibility Guidelines 2.0 (WCAG 2.0), standards for website accessibility developed by the World Wide Web Consortium (W3C).  In June 2017, a judge sitting in the U.S. District Court for the Southern District of Florida ruled in Juan’s favor, and ordered Winn-Dixie to modify its website to comply with WCAG 2.0.

Juan’s suit is currently under review in the U.S. Court of Appeals for the Eleventh Circuit, but what it started isn’t about to stop. As the first website accessibility case to go to trial and the first in which a business was directed to modify its website to comply with a particular standard, Gil v. Winn-Dixie has become a window on a rapidly emerging but little-considered issue—one that still exists largely outside the public consciousness even while generating a rising number of legal disputes: How does the ADA apply in cyberspace?

ADA-based lawsuits have nearly tripled over the past five years, to a projected 11,000-plus new filings in 2019. Figuring prominently in that figure is a rise in website accessibility cases driven by the proliferation of e-commerce platforms and of the absence of any federal guidelines explaining how businesses need to structure or modify their websites in order to comply with the ADA. This vacuum has spawned a new sector of ADA litigation, with more website accessibility lawsuits being filed in federal court during the first six months of 2018 than in all of 2017.

The accessibility of online retailers to website consumers with visual and auditory impairments is a new twist on an old issue, one that most Americans may still think of in terms of wheelchair ramps, wide restroom stalls, and low curbs. “This area of the law is largely unknown to those outside of the industry,” says Jeffrey S. Matty, a partner with Goldberg Segalla’s Cybersecurity and Data Privacy practice, a multidisciplinary team of attorneys working across the country to counsel, train, and defend clients facing all conceivable cybersecurity and data-related risks.

“The proliferation of website ADA lawsuits has certainly helped to bring about some discussion on the topic, but most owners and operators of businesses that have an online retail component are caught completely off-guard when a claim letter or lawsuit is received.”

Small stores without sophisticated legal counsel are especially unaware of the legal issues surrounding website accessibility and unprepared for related lawsuits, says Los Angeles- and Orange County-based partner Peter J. Woo. But even some larger businesses in the retail and hospitality industry get caught unaware. Peter recently fielded a new website accessibility case from a hotel that professed ignorance of the issue until being sued, he says. The hotel’s owners wanted to know how to prevent such lawsuits.

“There has been press on brick-and-mortar ADA public-accommodation lawsuits, particularly in California,” Peter says.

Businesses aren’t alone in lacking knowledge about the legal issues surrounding website accessibility; the average consumer is also largely unaware, says the Philadelphia-based Madeline Baio, a member of Goldberg Segalla’s full-service Retail and Hospitality practice and a board member of the National Retail and Restaurant Defense Association (NRRDA). “People don’t think about it, unless you have an impairment that prevents you from gaining access to a website,” she says.

Awareness of these issues amongst members of the public and business owners alike will continue to grow as more lawsuits are filed and covered by the news media, says Jeff, who works out of Manhattan and Raleigh. He and other Goldberg Segalla attorneys routinely handle web- and software-based accessibility claims, which in turn involve not only the firm’s Cybersecurity and Retail practices but also its Employment and Labor group, whose attorneys represent employers in a strategic partnership aimed at protecting the enterprise and its leaders while helping an organization advance its management philosophy and maintain its company culture. 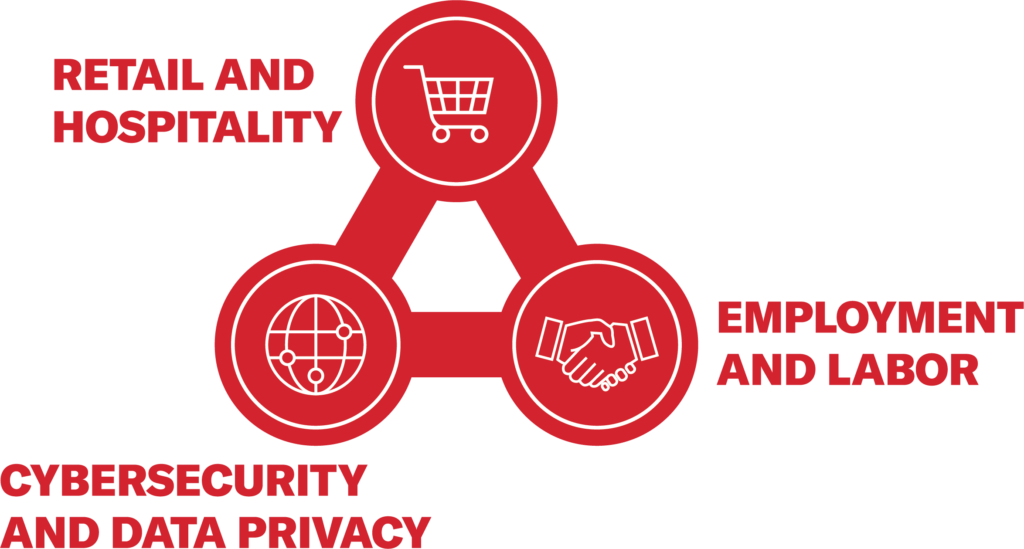 “We have been routinely defending these cases for the past two years,” says Manhattan-based Goldberg Segalla partner Marc S. Voses, the Chair of the firm’s Cybersecurity practice. “It’s a trend that’s been on the increase, and, frankly, there’s no stopping it.  In addition to the flood of formal lawsuits, we have seen a dramatic increase in the number of pre-suit claim letters where federal court litigation is threatened if a business does accede to the claimant’s demands.”

In 2019, Goldberg Segalla defended a retailer of motorized vehicles sued in U.S. District Court for the Southern District of New York. “We opted to promptly engage with plaintiff’s counsel and explain the issues with their case, including the fact that our client’s website was in substantial compliance with WCAG 2.0,  and were able to negotiate a settlement with the plaintiff, dismissing the action,” Marc says.“We then guided the client through the process of increasing their compliance with WCAG guidelines.”

In the end, Goldberg Segalla helped the retailer avoid hundreds of thousands of dollars in discovery and trial expenses associated with a potential class-action suit, Marc says.

Defending clients against these website-based ADA claims is challenging because the Department of Justice retains exclusive authority to issue regulations explaining what it means to be ADA-complaint, yet despite years of study and consideration, there remain no federal guidelines on the topic, only industry recommendations such as WCAG, Goldberg Segalla attorneys say.

Though the U.S. Department of Justice was to provide more direction on such cases, it has failed to do so under the current administration, Peter says. “Currently, we are relying on recommendations made by the prevailing accepted guidelines under WCAG. However, this is not binding law.”

Although the DOJ published several Advance Notices of Proposed Rulemaking with regard to website accessibility between 2010 and 2016, inviting public and industry comment on prospective regulations and indicating that specific guidance would be forthcoming, these notices were summarily withdrawn by former Attorney General Jeff Sessions on December 26, 2017, leaving consumers, businesses, and the legal community alike to continue to question what is necessary for a website to be “ADA-compliant.”

“As opposed to ensuring ADA compliance from a structural or architectural standpoint, there are no definitional terms for what a business has to do to meet its obligations to eliminate barriers to disabled patrons’ access to and enjoyment of an online retailer’s goods and services.

“The threshold factor for the ADA to apply to any particular business or entity is that it has to be a ‘place of public accommodation,’ and the ADA lists 12 specific categories of what types of places fall within that spectrum.

“No surprise, the legislation enacted in 1990 doesn’t specifically list websites as within that category, so the federal district courts were initially left to grapple with the concept of whether a website constitutes ‘a place of public accommodation.’

“Any time individual district courts are asked to decide  threshold issues of applicability and scope of a broad statute in the absence of any regulatory or departmental guidance, you’re going to end up with conflicting decisions.”

A major underlying problem, Madeline says, is the breathtaking pace of new developments in the internet and digital communication. “Technology is changing all the time,” she says—“so rapidly that, for people who are trying to develop standards, it’s hard to keep up.”

In the meantime, Jeff says, “a large part of our role as counsel is to educate— and it goes beyond just explaining the obligations that are at issue in the lawsuit.”

“These sorts of claims provide a broad opportunity not only to advise clients on their responsibilities to the public at large, but also as to how they can better protect themselves when entering into engagements with web-hosting and site development vendors, and by maintaining an insurance portfolio that may provide businesses with a source of protection in the event they find themselves the target of a technology-related ADA claim.”